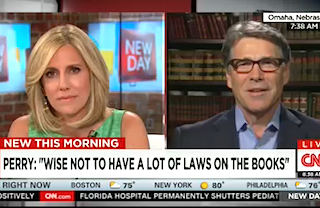 Rick Perry may have a campaign staff full of women in high positions, as he stressed during an interview with CNN’s Alisyn Camerota on New Day this morning, but he does not believe America needs any new laws to ensure that women receive equal pay to men. “Women get equal pay,” the GOP candidate declared.

After commending Perry for having a female chief of staff on his campaign, Camerota pointed out that as governor of Texas, he had vetoed the Texas Equal Pay Bill, which was introduced by former gubernatorial candidate Wendy Davis and would have allowed women to sue employers over wage discrimination in state court as opposed to federal court.

“This was a piece of legislation that basically duplicates what’s at the federal level,” Perry said on Tuesday morning. “In the state of texas we think it’s kind of wise not to have too many laws on the books.”

Asked if he pays the female members of his staff the same as their male counterparts, Perry would only say that “when you’re the chief of staff you make more money than the governor.” While putting women in higher positions in his own campaign can help pay equity on a very small scale, it does little to help those women in the “real world” who still make less than men across the majority of the workforce.

Left unsaid amidst all of this was the fact that Perry has actually had to stop paying his campaign staffers due to a sharp decrease in donations. So technically, anyone still working for Perry at this point is receiving equal pay: nothing.