Rick Perry: Let Trump Run on What He Wants, ‘I Will Run on Actual Experience’
Video

Rick Perry: Let Trump Run on What He Wants, ‘I Will Run on Actual Experience’ 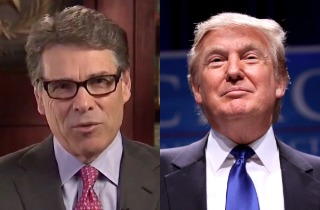 Rick Perry appeared on Fox’s America’s Newsroom on Wednesday, where he discussed how being the former governor of Texas gave him an edge in strategic perceptions over 2016 rival Donald Trump. Perry derided Trump’s proposal on Tuesday to build a wall across the Mexican border, saying that while it makes for good television, “Americans are not looking for rhetoric.”

Perry told Bill Hemmer that he would “let [Trump] run on that, I will run on actual experience.” “They’re not looking for rhetoric,” Perry said, “they are looking for somebody who has been in the field of battle… whether it is job creation or whether it’s dealing with the border.”

Perry conceded that while strategic fences have their own advantages, he argued that the National Guard’s strategic use of personnel and aerial searches were equally responsible for a 74% decrease in illegal immigration last summer. “The reality is if you want to secure the border, we know how to do it,” Perry said, though he said Trump’s entrance to the race with provide Republican voters with a great deal of choices.

Hemmer finished the discussion by pointing to Trump’s statements about Mexican immigrants taking advantage of the American economy, asking Perry, “Are they ripping us off?” “I think you have to have diplomatic relationships with a lot of different countries. Mexico happens to be the number one trading partner with the state of Texas,” Perry said. “We may disagree on a number of things, but, again, I’m not going to get distracted on what is important to the people of this country.”

You can watch the interview here, via Fox: