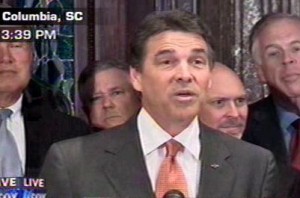 During Rick Perry‘s press conference today about his flat tax plan, CNN reporter Jim Acosta posed a question to the Texas Governor about his recent comments about President Obama’s birth certificate. “You raised the issue of the president’s birth certificate over the weekend. I’m just curious what will it take to convince you that the president was born in this country? And do you have any plans to release your birth certificate?” Acosta asked. “I’ll cut you off right there,” Perry interrupted, giving the reporter an irritated scowl. “That is one of the biggest distractions that there is going. We need to be talking about jobs. If somebody wants to see my birth certificate, I’ll show it to ’em. But that is a distraction and Americans don’t really care about that, if you want to know the truth of the matter. What Americans want to talk about is jobs.”

Perry set himself up for the question by bringing up the conspiracy theory in an interview with Parade Magazine this weekend and kept the issue alive in a followup interview by saying, “It’s fun to poke at him a little bit and say, ‘Hey, how about it. Let’s see your grades and your birth certificate.'”

The Texas Governor had hoped his new tax proposal would be the focus of the news today but it has been completely overshadowed by the birther issue.