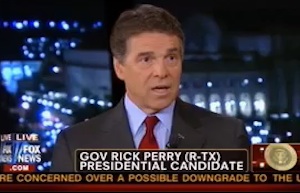 Rick Perry made a bold policy proclamation Monday night on Special Report with Bret Baier, declaring he supports a no-fly zone in Syria without approval from the United Nations.

Fox News contributor Charles Krauthammer had asked the Texas Governor if he would support armed resistance in Syria.

“Let me back up and say we missed some great opportunities,” Perry opined. “Iran is the real issue in the Middle East from my perspective and we had the opportunity in 2009 with the Green Revolution to use economic sanctions, to use diplomatic sanctions over covert. We had the opportunity to help the citizens overthrow that very oppressive regime and to stop them in their quest to get a nuclear weapon in 2009 and we failed. Naively, the president and the administration was talking to Syria and the Iranians and we wasted a great opportunity. The point should always be when there is this type of oppressive regime obviously working with Iran in that area to be very hostile to our oldest friend and longest serving democracy Israel, we need to put everything on the table there. There should not be anything set aside that keeps the pressure off those individuals.”

“Would you do what we did in Libya, which is to institute a no-fly zone over Syria?” Krauthammer asked. “If you were president today, would you advocate that we do that in Syria?”

Bill Kristol asked if he’d support such an action without United Nations approval.

“I would not spend a lot of time waiting for the UN,” Perry explained. “We need to sit down as a country and have a conversation about is the continued funding of the United Nations in the best interest of America.”

The Washington Examiner’s Byron York notes that Perry is the first Republican candidate to support a no-fly zone in Syria.