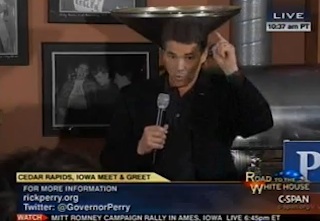 With all due respect, there have been a lot of Rick Perry gaffes in this campaign so far. Heck, I don’t think even Perry would argue with that. I have to say, though, this is one of the most enjoyable. You see, during an Iowa town hall, Perry was asked a question about a Supreme Court case that, by all indications, he knew nothing about. However, instead of backing down, he bravely powered through and just kept talking, somehow managing to give a two and a half minute answer about…something.

The question was actually the first one Perry took, right after chuckling about how “awesome” it was to be there. A gentlemen asked him how he could reconcile his love of small government with his criticism of “Lawrence v. Texas” and it’s clear from the way Perry slowly repeats what he just heard that he’s at a loss.

We could quibble with the fact that a Texas Governor who’s made a large (and poorly received) part of his campaign about trashing homosexual rights somehow knows absolutely nothing about a landmark 2003 case that struck down the anti-sodomy laws of his very state. Sure, that’s pretty damning. But all that serious stuff would block out the real charm of this clip; Perry talking. And talking and talking and talking.

Now, I’ve never understood that whole idea that people want a President they can “have a beer with.” Probably because I wouldn’t trust any of my drinking buddies to run a 5k, let alone, y’know, the country. But there’s something very relatable about Perry’s reaction here (discomforting ignorance aside). The guy asking the question has a thick accent and Perry looks exactly like I do when I’m talking to someone foreign and I can’t make out what they’re saying but I don’t want to look like a rude American. He just latches onto the one part of the question he actually understands and keeps filibustering until someone says something else. (For those curious, in this case, it appears Perry only really understood the words “Supreme Court” and “government.”)

So, yeah. Watching this clip, I could totally see myself having a beer with this guy.

Sure doesn’t mean I’d vote him into office anytime soon.

Watch the clip from CSPAN below: