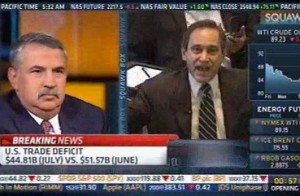 “Your question is idiotic,” fumed Friedman, when asked whether Social Security was a type of pyramid scheme. “You’re idiotic!” responded Santelli.

The heated on-air exchange began as Santelli questioned Friedman directly whether there was any legitimacy to Perry’s suggestion.

“It’s a program that made promises that it cannot keep in full and it needs to be fixed and reformed,” answered Friedman. Santelli returned fire: “Isn’t that exactly what a Ponzi pyramid is?” Soon after, the discussion devolved into namecalling.

FRIEDMAN: It is pay as we go. Ronald Reagan fixed it. Why can’t we fix it?

SANTELLI: What does Ronald Reagan have to do with my question?

FRIEDMAN: What does your question have to do with reality?

MICHELLE CARUSO CABRERA: We brought it up.

SANTELLI: You can’t decide that more people is the only thing made Social Security work. We have a real issue because many people in government seem to like to read your work.

SANTELLI: I didn’t ask if we should fix it or not. I asked if it’s a pyramid scheme.

FRIEDMAN: Your question is idiotic. That’s what you asked.

FRIEDMAN: So do I.

Watch the fracas below, courtesy of CNBC: