Rick Santelli: If It Wasn’t For The Tea Party, America ‘Would Have Been Rated Triple B’ 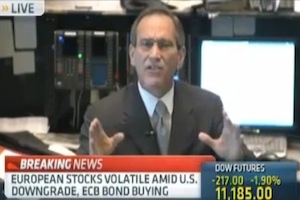 CNBC’s Rick Santelli is considered by many to be the “Father of the Tea Party” and this morning he forcefully defended his “baby” from various attacks. Insisting that it was embarrassing to see the Obama administration blame everyone and everything for the S&P downgrade, Santelli instead demanded to know when a real leader will stand up and tackle the big problems in our economy?

Santelli unleashed a furious critique of the Treasury Secretary for trying to “blame Bush, blame the sun” and instead Santelli urged:

“In the end we need to address problems we know exist. A Treasury Secretary or a President should be out here, not fighting S&P, not grabbing the other coach and slapping him around, taking the umpire behind the barn – he should be getting the team psyched.”

And the Obama administration was not his only target, as he was disgusted by Senator John Kerry’s attempt to describe S&P’s action as the “Tea Party Downgrade.” Santelli responded, “blame the Tea Party? Jesus, no wonder Kerry did so well in an election. If it wasn’t for the Tea Party they would have passed the debt ceiling thumbs up. We would have been rated Triple B!”

Throughout the segment Santelli barely took a moment to catch his breath, as even in the final seconds he maintained his anger as he declared it was “reprehensible” that all of the leaders in Washington are now on vacation for a month during this crucial time. Luckily for Tea Party supporters and fans of unpredictable television, it’s not likely that Santelli would ever be away for that long.

Watch the clip from CNBC below: