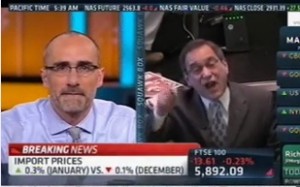 CNBC personality Rick “No, Not The Google Guy” Santelli may not be a household name, but he is well-known to Tea Party supporters and detractors alike as the guy who launched the movement onto the national radar by ranting, to the approving jeers of a crowd of stockbrokers, about how the real villain in the financial meltdown was your loser neighbor and his extra bathroom. On Tuesday, he offered advice to the “vandals” of the Occupy movement: “if you want to make a difference, don’t go break windows.”

Santelli began by praising the Tea Party. “While the vandals are on the street corners,” he said, “the Tea Party conservatives, they’re working the statehouses, the governorships, the mayorships, the Senate, the House. See, they understand, they’ve read the Constitution.”

“If you want to make a difference, don’t go break windows. Okay? Break some phony arguments that things like austerity are going to put you in a hole.”

Finally, something that Rick Santelli and I can agree on. You shouldn’t break windows if you want to make a difference. And you especially shouldn’t encourage others in your movement to break windows as an explicit form of political expression. You know, like this guy did:

Maddow reports on a number of incidents nation-wide where it appears people opposed to the health care bill are using violent means to express their displeasure. All of the incidents (five) involve bricks being thrown through Democratic party office windows, one with an anti-Obama message attached to it (a Barry Goldwater quote, to be exact: “Extremism in defense of liberty is no vice”). The FBI is also reportedly investigating threats made against Louise Slaughter’s family.

Apparently, all this brick throwing is the idea of Mike Vanderboegh, the former head of the “Alabama Constitutional Militia ” who on his website wrote that “we can break their windows…before we have to resort to rifles to resist their well-intentioned tyranny.”

The real punchline, though, is this:

Michael Vanderboegh, the Tea Party leader and former militiaman who is calling for an armed march on Washington for April 19, and who urged people to break Democrat party office windows, is on government disability!

I also agree with Santelli that we should break phony arguments, like the argument that anyone is arguing that austerity is going to put you in a hole (although I thought it was my “loser” neighbor, not government spending). We were already in a crater when Santelli did his rant heard ’round the world. The argument is that things like austerity harm an economic recovery, which is a plainly obvious fact. I’m glad we had this talk.