Rick Santelli Rants About ‘People That Are Working, That Are Way At The Top’
video

Rick Santelli Rants About ‘People That Are Working, That Are Way At The Top’ 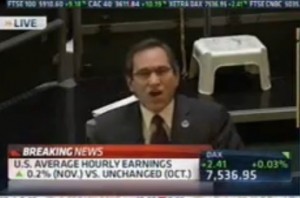 It wouldn’t be Jobs Report Friday without some kind of rant from an anti-Obama zealot, and this morning was no exception. CNBC analyst and Tea Party fuse-lighter Rick Santelli unloaded a raft of complaints about the better-than-expected November jobs report, the guarded optimism about the economy, and the poor, hard-working rich people who figure to see their tax rates increase slightly as part of the fiscal cliff negotiations. “The only people who bring tax revenues to the party are people who work,” Santelli said, “and the discussion is mainly about the people that are working, that are way at the top.”

Santelli, you may remember, is the screeching lunatic who put the Tea Party on the national radar with a February 2009 rant about how the global economic catastrophe was the fault of “loser homeowners” and their “extra bathrooms,” while stock traders cheered him on. It was like Hannibal Lecter taunting America’s liver while the fava beans and Chianti whooped it up behind him. Today, Santelli explained who the real working people in America are.

Squawk Box host Joe Kernen began by needling Santelli about pre-election conspiracy theories on the Bureau of Labor Statistics cooking the unemployment numbers in President Obama’s favor. “Rick,” Kernen asked, “did they add those government jobs to get below 8% and now they’re taking them back? Is that what happened?”

Despite what is seen as somewhat positive economic news, Santelli blasted the current state of the job market, saying “We lost 350,000 people in the labor force. We’re at a time in our history where it’s all about jobs and tax revenues.”

“The only people who bring tax revenues to the party are people who work,” he continued, “and the discussion is mainly about the people that are working, that are way at the top.”

Santelli then urged viewers to read a Wall Street Journal op-ed by Peter Schiff that argues against tax fairness using 1958 marginal rates and a statistical woodchipper, all to mask the weakness of its conclusion: that a 3.6% increase in top marginal rates will “diminish the incentives and capacities of innovators, business owners and investors.”

Of course, most of you probably cush it out all day on a construction site, or in an office cubicle, or some other “job.” Imagine if you had to do the really hard work that Santelli’s talking about, like laying people off and cutting wages to boost profits, or screwing your employees out of health insurance, or drawing a top 2% salary to perform the back-breaking task of ranting at everyone else about how they’re not really working.

The November jobs numbers, while slightly better than expected, also showed downward revisions for September and October. There are other positive economic indicators, but all of it really points to a need for the additional stimulus that President Obama is asking for, and then some. Cutting Rick Santelli’s taxes just isn’t in the cards.

Following Santelli’s rant, Squawk Box co-host Becky Quick reminded him that “the stock market is looking at it as good news, whether you believe them or not. The market went from down by 20 points for the Dow futures to up by more than 56 points, so you saw a big jump.”