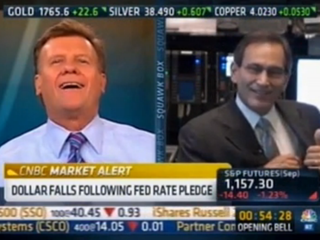 Would-be pretender to the Tea Party throne Rick Santelli took to the airwaves to trash another monarch today on CNBC: King George III, who he brought back from the dead to compare to a banking analyst that dismissed the Tea Party as “freaked out white men who are unemployed.” Railing about the importance of the Founding Fathers, he left analyst Meredith Whitney asking herself, “What have I done to you?”

Santelli, who is not exactly known for his subtlety, joined the CNBC crew after Whitney had noted that most of the Tea Party was “scared to death” because “the fringe element is… freaked out white men who are unemployed and have been unemployed for three years.” Her point was that “Machiavellian Democrats” need to diffuse the Tea Party by creating jobs, so that its members will stop being scared.

Popping back into the screen from his 1970s nuclear power plant stock market trading office set, Santelli appeared to be bubbling with rage below the surface, asking host Joe Kernan whether he wanted to “ask me anything.” Kernan replied that “I never know how to get you going,” until he finally put the pieces together: “oh, yeah, you are white and you are angry.” This predictably set off Santelli: “The last person that said that was King George and he said it about the colonists, you know? That’s all I can say!”

Kernan chose (accurately) to describe this as a “YouTube moment” rather than indulge Santelli, who kept going off anyway. “I don’t need to rant about that,” he ranted. “You know, those were our Founding Fathers!” He then went on to point out that munis were stable investments, while Whitney tried to explain herself. “I was empathizing with people who are unemployed… Why is he so angry?” she turned to Kernan. “What have I done to you?”

The segments (Whitney’s comments and Santelli’s response) via CNBC below: