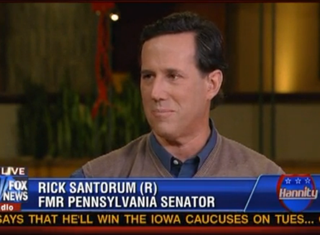 Earlier today, Alan Colmes made headlines by making an unseemly comment about Rick Santorum— namely, about his child who died hours after being born. Colmes let his Twitter followers know that he did his part to apologize to Santorum, and the latter responded to that apology on air today with Sean Hannity, explaining his actions with his child and his acceptance of Colmes’ apology.

Hannity brought up that Colmes had said he had apologized to Santorum and brought the audience to speed on his comments, or at least the subject matter therein. Santorum responded that “there’s a lot of nasty stuff out there on the internet, and I’m sure Alan Colmes reads a lot of that stuff from the left.” He then explained what he had done with the child– remain with him for the night and show him to his siblings after he had passed, as a way to “recognize the dignity of that life”– and added that “it was a tremendously healing experience,” though “I can understand why people may want to do something differently.”

As for his conversation with Colmes, Santorum explained that he accepted. “I know Alan is a very good person at heart,” he told Hannity, “He made a mistake, he admitted the mistake… we all say things and do stupid things.” He did note, however, that it was “part of the culture” for people to make mean comments and impossible to avoid them. “They do say those things, but please, don’t repeat them.”

The conversation with Hannity via Fox News below: