Rick Santorum Attempts to Remind CPAC That He Still Exists 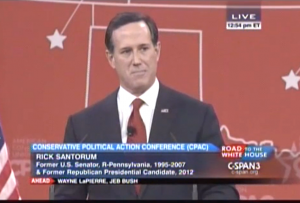 Entering the CPAC stage to the song written for his 2012 presidential campaign, former Senator Rick Santorum began his CPAC speech began by reminding everyone that he was once a viable political candidate for president. But, he argued, his policy vision then was not just relevant to today’s problems — in fact, he claimed that he predicted the rise of militant Islam and was therefore in the best position to maybe run for president.

“Pundits wanted to know why I could win eleven states,” he told the crowd, starting with a domestic policy vision that protected small business owners. “I won because I stood for someone: the little guy, the American worker. If we’re going to win in 2016, we need to stand for the little guy too.”

-RELATED: Santorum Laughs Off Libertarian Critics During Heated Clash with The Independents

Most of the speech focused on his belief in America’s decline, as embodied by President Barack Obama‘s inability to face the threat of radical Islam, embodied both by ISIS and Iran’s burgeoning nuclear program. “It wasn’t just the president’s liberal outlook, but his profound lack of experience that has created the problems here in America,” he argued. “Commander-in-chief is not an entry level office, and the Oval Office is not a place for on the job training.”

“I warned about the gathering storm of the 20th centrry ; the threat of militant radical Islam. I was called everything from chicken little to a warmonger,” Santorum continued, citing all the times Democrats had voted against him in the Senate. “This is not a threat to be passed off. In the 1930s we could have known was the threat was. All we needed to do was read their books, and we will know what they want to do to the US.”

Watch below via CSPAN3: