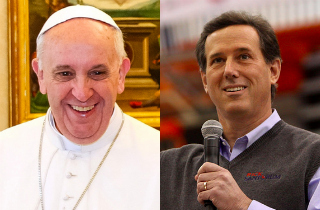 Rick Santorum has long prided himself as a devout Catholic, but he apparently did not like what he heard recently from Pope Francis I about his followers’ tendency to act “like rabbits.”

In an unprecedented statement to reporters during his flight from the Philippines to Rome, the Pope suggested that Catholics could take measures to limit the number of children they have. “God gives you methods to be responsible,” he said, according to the National Catholic Reporter. “Some think that — excuse the word — that in order to be good Catholics we have to be like rabbits. No.”

When he was asked for reaction to that statement on Hugh Hewitt’s radio show Wednesday, Santorum said, “It’s sometimes very difficult to listen to the Pope and some of the things he says off the cuff, and this is one of them.” The former Republican presidential candidate explained that with these remarks, Pope Francis was “giving his own opinions” and that he words don’t actually “reflect the idea that people shouldn’t be fruitful and multiply, and that people should be open to life as something that is a core value of the faith and of the Catholic Church.”

“Maybe he’s speaking to people in the third world, but the problem certainly in most of the Catholic world is not procreation,” Santorum continued. “I mean, in Europe in particular, you have birth rates that are only over, just a little over one for every two people. So this isn’t a global problem, and I don’t know what the Pope was referring to.”

On the question of whether the Pope is opening the door for Catholics to use contraception, Santorum did his best to shut that theory down. “The bottom line is that’s not going to happen,” he said. “I don’t think anyone who seriously looks at this believes that it’s not possible to happen. I mean, the Pope is the Pope, but the Pope has a lot of other people around him who advise him. And you know, the most important thing is that as a Catholic, I believe he has the Holy Spirit, and the Holy Spirit isn’t going to let him make that kind of mistake.”

Also on Wednesday, in an apparent attempt to walk back the “rabbits” line, Pope Francis said, “It gives consolation and hope to see so many numerous families who receive children as a real gift of God. They know that every child is a benediction.”