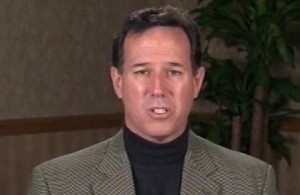 Rick Santorum appeared on CNN’s State of the Union earlier today, and he addressed his accusation least week that the Obama administration engages in appeasement. The president responded by suggesting people ask Osama bin Laden and other terrorists he’s killed under his administration if he favors appeasement. When Candy Crowley took issue with how Santorum was accusing Obama of appeasement, Santorum incredulously interrupted to tell Crowley she wasn’t being accurate.

Santorum cited Iran as “the biggest threat to Israel and… to our national security.” Crowley interrupted to say that Obama had supported sanctions, but Santorum dismissed the notion Obama has supported any real, “meaningful sanctions.” As president, Santorum pledged to “fund the pro-democracy movement” in Iran, and would insist Iran open up its nuclear facilities to inspectors.

Crowley returned to the issue of sanctions, and tried to explain that President Obama was in favor of imposing sanctions, but Santorum interrupted her and said “that’s just not true.” He patiently explained that Obama has not favored the kind of sanctions on Iran that many others in Congress have called for.

“Ask Robert Menendez and ask all the folks in the United States Senate who want to impose the real sanction that will make a difference on Iran and the president has opposed it. Now that’s just a fact. He also has recognized the state of Syria, called Assad a reformer, has continued to have an embassy there, when in fact this is a real thug that is a real threat to the state of Israel and to the stability of the region.”