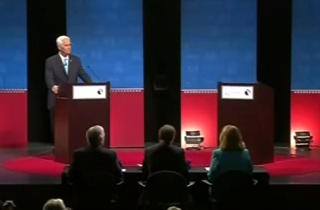 In what can only be described as the strangest debate moment in recent memory, Florida Governor Rick Scott refused to get on stage for the start of his debate with opponent Charlie Crist because of the small fan Crist brought with him to the debate stage.

According to The Tampa Bay Times, minutes before the debate, Scott refused to take the stage because of the fan, saying debate rules forbid any electronic equipment on the stage. Crist wanted the fan below the podium so he could keep cool during the debate.

So the debate started out with Crist just standing on stage by himself. One of the moderators called this “an extremely peculiar situation” and told the audience exactly why Scott wouldn’t appear on stage. When he was done, the audience loudly booed.

So the debate carried on as normal, just without one of the candidates present. Fortunately, Scott did emerge a few minutes later and joined the debate as normal. You know, after that whole refusing-to-come-on–stage–because-of–a–fan thing.

Update- 9:07 pm: Both campaigns addressed the strange moment later on in the night. Firstly, a Crist advisor tweeted out this agreement about debate rules they signed, which included a note by Crist about his possible need for a fan:

And then there was this comment from Scott’s campaign manager:

Charlie Crist can bring his fan, microwave, and toaster to debates – none of that will cover up how sad his record as governor was compared to the success of Rick Scott. Crist should buy a fan for the 832,000 Floridians who lost their jobs while he was governor.

[Correction: the Crist advisor above was mistakenly identified as a Scott advisor.]