Ricky Gervais Tells Piers Morgan About Being a ‘Pathological Atheist’ and… 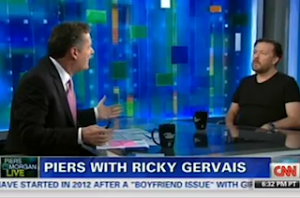 Ricky Gervais sat down with Piers Morgan for an extended interview Friday night, talking about everything from his atheism to the newly controversial issue of gun permits for blind people. But they began by talking about Gervais’ weight.

Morgan congratulated Gervais on being “thinner than ever,” and even showed before and after photos to prove his point. A conversation on health quickly turned to religion. “You’re a pathological atheist,” Morgan said, “and so the thought of death is very final for you.”

He said one of the things that annoys him the most is “religious intolerance, this arrogance, arguing over who’s God is right.” He contrasted “spirituality, a personal feeling, journey, hope” with religion, which is an organized body that uses that for power and corporation.”

Finally, he and Morgan discussed one of their mutual loves: Twitter. “I think the world is sort of losing their sense of humor, particularly in terms of irony over the last few years, but Twitter never had it,” Gervais explained. “Irony doesn’t work on Twitter, because there’s always someone. Again, we talk about percentages, you know. I’ve got 5 million followers and there is probably one or two idiots a day, which isn’t bad.”