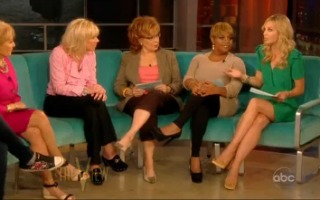 Rielle Hunter’s new book is out, and she appeared on The View this morning to answer for it. Barbara Walters kept a very tight grip on the rest of the panel (Elisabeth Hasselbeck tried to jump into the fray almost immediately, and was gently rebuffed), though she seemed to be barely holding in her disdain as she introduced Hunter as “the sexy blonde” that politicians “can’t resist.”

RELATED: In Uncomfortable Interview, Rielle Hunter Reveals She And John Edwards Have Split

Walters’s first question for Hunter was about her relationship with John Edwards, which has apparently ended. Hunter said her reason for the breakup was that she “[doesn’t] want to hide [their] relationship anymore…I’m not a mistress, I’m a mom.” This was too much for Hasselbeck, who jumped in to remind Hunter that “mistress” was exactly what she was during Edwards’s marriage to his wife Elizabeth. It got worse from there; Hunter didn’t acquit herself very well either when Whoopi Goldberg asked about the negative portrayal of Elizabeth Edwards in the book — “In your book you trash a dead lady, whose husband you had an affair and a baby with…it makes you look bad,” she said — as her response was that the public perception of Elizabeth being a saint and John a demon is inaccurate, in her opinion.

And the hits just kept on coming, when Walters then asked Hunter about her accusation that Walters “screamed at her” and “bullied” her during an interview; she has been doing interviews for 30 years, she said, and while she freely copped to “[making] people cry,” she was firm in her conviction that she’s never yelled at an interviewee. The rest of the co-hosts, seeming sort of exhausted and grossed out by the whole thing, all chimed in to agree that Walters doesn’t ever yell. Hunter insisted that this is not the first time in history that two people remember the same encounter differently, and thus one of the most uncomfortable View interviews of all time drew to a close. You can see a clip of the segment here via ABC: