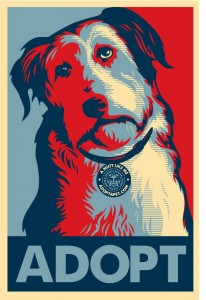 I’m afraid I must agree with the learned, now-facially hirsute Jon Stewart: Nothing President Obama does will ever make his critics happy. In an appearance on The View, President Obama spoke with rare honesty about the issue of race, but got “Breitbarted” for his trouble. The media have gone into a frenzy over his use of the word “mongrel,” and some in the right-wing media have embarked on a particularly tone-deaf outrage high.

What I found refreshing about the President’s remarks was his acknowledgment of the instinctive root of racial prejudice, that primitive suspicion of things that are different (what some scientists call the “reptilian brain“), with which we all struggle. For most of us, it is a nictitating impulse, but its echo still informs our actions to some degree.

This is the key difference in how Obama talks about race, the fact that he doesn’t regard racial resentment as an unforgivable sin,  but rather, as something that often feels like it has legitimate roots. The biggest problem with race relations in America is denial.

Out of all of the points the President makes in this segment, however, all we hear from the media is a Beavis and  Butthead-esque “He said ‘mongrel!’”

The remark has sparked varying degrees of outrage among conservatives, who seem most perplexed by the fact that Obama can get away with it, but a hypothetical Republican could not. That, and the relative merits of the words “mutt” and “mongrel.” At least Rush Limbaugh seems to know they’re the same thing, but still manages to be outraged.

This is silly on its face, since not only has President Obama used this self-deprecating imagery before, so have many of the working-class white people I grew up with. It is born of a sense that lacking a pedigree is not only not a negative, but a point of pride.

Just below the surface, though, is the fact that Obama was actually being nice about it. He said “that’s actually true for white America as well, but we just know more about it.”

What he didn’t have to say is that the deficit of pedigree among  black people in America is the result of all of that abducting into slavery, raping, lynching, and epidemic incarceration at the hands of a racist criminal justice system. He was trying to be nice about it. The reason he “gets away with it” is his point of view. It’s the same reason you can “get away with” calling your girlfriend “Sweetie,” but some dude at a bar can’t. And given the way this has overshadowed his larger message, he didn’t, in fact, “get away with it.”

Still, opponents of the President, as bewhiskered Daily Show host Jon Stewart points out, are duty-bound to focus on this crap. Shame on the mainstream media for focusing on this remark, out of context, Breitbart-style.