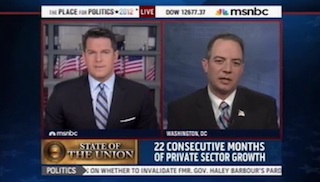 Ah, discourse. Seriously, I’m starting to think that we’re heading towards a huge plot twist where we find out that there were actually two America’s all along and these guys have just been accidentally talking about different ones. It will be like the “two island” reveal on Lost all over again.

This segment was doomed from the beginning. Roberts initial question of “Why can’t the Republicans work with the President to help move the economy forward?” could easily be translated to “Why is your party such jerks?” Whereas Priebus’ accusations that Roberts was asking “questions front-loaded with DNC talking points” could easily be translated to “Why is your network such jerks?” It turned into an argument that wasn’t even about ideology but about actual numbers. Before long, Roberts was accusing Priebus of moving figures around like Lucy van Pelt with a football and you can fill in the rest.

Really, you know what? Forget this. It would be better if we all just went back and watched that old Lost episode instead.

And I say that even though I hated Lost.