RNC Chair Spars With MSNBC’s Heilemann Over IRS: ‘Don’t Need To Plead The Fifth If You’ve Done Nothing Wrong’ 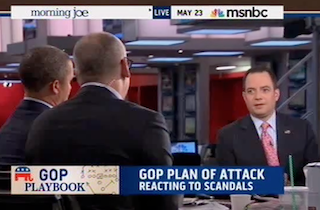 Republican National Committee Chairman Reince Priebus grew a bit testy during his Morning Joe appearance on Thursday as the other guests — John Heilemann in particular — challenged his assertions regarding the IRS scandal. Right from the start, Heilemann objected to Priebus inferring guilt from IRS official Lois Lerner‘s using her Fifth Amendment right.

Lerner didn’t do herself any favors by choosing not to answer any questions at yesterday’s congressional hearing, Priebus argued — “which, whether you agree with it as a basis of law or not, implies there are some criminal aspects of this investigation.” Heilemann interjected as Priebus further defended his point.

“You don’t need to plead the Fifth if you’ve done nothing wrong and come forward,” Priebus argued, as Heilemann said that’s simply not what the amendment means. The pair went back and forth as the chairman reasserted his remarks about the administration not having a handle on the facts, but Heilemann maintained that the earlier point was wrong.

Heilemann pressed Priebus previous comment that Obama is in the middle of said “warfare” — an “assertion that’s not borne out by any of the facts.” Priebus maintained that he was being consistent, prompting Heilemann again to ask, “If you don’t have the facts you need, why are you saying he’s in the middle of it?”

There was no agreement on that front — and the table plainly laughed when Priebus asserted they were getting into a “semantics” argument.

“If you’re in my shoes, and you have the IRS targeting conservative groups and tea party groups and any person critical of the White House, what would you think?” he asked toward the end of the segment. “Give me a break.”