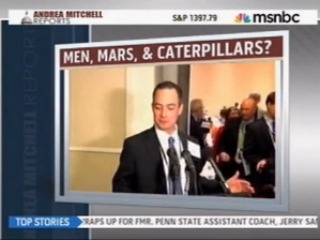 In an interview with Bloomberg TV, RNC chairman Reince Priebus told Al Hunt of Political Capital that the so-called “war on women” is a fiction created as the media on par with claiming there is a “war on caterpillars.”

RELATED: Michelle Malkin: ‘War On Women Rhetoric Has Backfired On The Progressive Left’

MSNBC host Andrea Mitchell spoke about Priebus’ comment with Rick Santorum campaign press secretary Alice Stewart, who said it “might not have been the best analogy.”

“But the truth is,” she continued, “there’s really not a gender problem with the Republican party. Women, conservatives — and liberals, for that matter — they’re multi-issue candidates, they’re concerned about jobs, they’re concerned about the economy. So, you know, Republicans are embracing men, women and all folks. But the main thing is women are just like men. They want jobs, they want the economy to turn around, they want to be able to provide for their families just like the men do.”

Mitchell pointed to recent polling date suggesting there is an 18-point gender gap between Republicans and Democrats. The recent national conversation on social issues and contraception, Mitchell surmised, has not helped Republicans when it comes to female voters.

And here is Priebus’ original interview, courtesy of Bloomberg: