RNC Chair Reince Priebus On President Obama: ‘The Fish Is Rotting At The Head’ 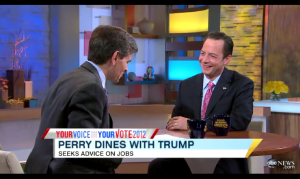 On Good Morning America this morning, Republican National Committee Chair Reince Priebus made clear that he is “very satisfied with where the field is at in the Republican side of the aisle” and that “it’s time to start to debate about how to get American back on the rails and save ourselves economically and make Barack Obama a one-term president.” As he sees it, President Obama has “taken the country off the rails,” and Congress’s lagging approval ratings are not a problem. “You know I’m not worried about it, because I think that at the end of the day the fish rots at the head,” he said.

Unconcerned by the current crop of candidates in-party bickering, he sounded hopeful that any one of them could bring a corrective “authenticity” into the White House. “We’re going to have a rigorous primary on our side of the aisle and I think that’s what the American people are looking for,” he told George Stephanpoulos, promising he would not play “referee.” “I think we’re sort of done with the staged speeches, the pageantry, and the talking.”

And of Obama’s leadership, which he likened to a rotting fish head, he said:

“I don’t think the president has led, I think that he’s frustrated even his own base. You saw that in New York just two nights ago when even Democrats are saying ‘Look, we don’t like the direction that even Barack Obama is taking this country.’ And he’s going to have to answer to that.”