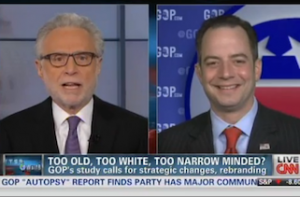 Monday afternoon on CNN’s The Situation Room, RNC chairman Reince Priebus spoke to Wolf Blitzer about the “autopsy report” he released this morning on what went wrong for his party in 2012. The report outlines 219 different potential “fixes” for the party and puts forward a $10 million plan to reach women and minorities.

Priebus began by advocating that the GOP engage in a “permanent campaign,” a term that has been used derisively against President Obama. “We’re committed to hiring hundreds of paid people into African-American, Hispanic, and Asian communities across America, even in 2013, which, for our party, that doesn’t really like permanent politics, is something very new.”

He also admitted that some of the party’s “messaging” does need to change, offering up Mitt Romney‘s “self-deportation” talk as a something that “hit every Hispanic kitchen table across America” and didn’t really reflect the party’s official position. Priebus argued that the GOP needs people on the ground in those communities dispelling “myths” about the party or else “the narrative and the caricature end up becoming reality.”

Blitzer also tried to get Priebus to take sides in the growing battle between the younger and older generations of the Republican Party, characterized by Senators Rand Paul (R-KY) and John McCain (R-AZ). Priebus demurred, offering support to all members of the GOP, while giving revealing some preference for the younger generation. “The young faces in our party are the future of our party,” he said. “But we can still honor heroes like John McCain, too. So I don’t think we’re in any position to start cutting people out of our party.”