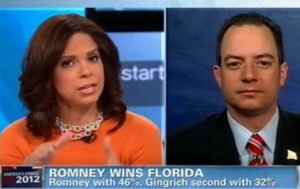 In an appearance on CNN’s Starting Point Wednesday morning, RNC chairman Reince Priebus tried out a little condescension and confrontation on host Soledad O’Brien, and was met with curt impatience. Asked if the nasty Republican primary race could damage the eventual nominee, Priebus passive-aggressively accused O’Brien of “spinning,” while a visibly annoyed Soledad O’Brien pressed him to get to the point, and later challenged him on his comparison of President Obama to cruise ship villain Captain Francesco Schettino.

O’Brien’s question was pegged to a report showing that 92% of the campaign commercials run in the week before the Florida primary were negative ads. Citing former Massachusetts Gov. Mitt Romney‘s rising unfavorability rating among independents, she asked Priebus “Isn’t that really, this kind of stuff, a big problem?”

“I don’t necessarily believe that tough primary competitions carry in the general elections,” Priebus began. “The history there, Soledad, is that it really doesn’t.”

He then threw in a completely gratuitous shot at a fair, data-driven question. “I mean, if you’re really being objective here, not spinning here, Soledad, you look back –”

“Appreciate that,” O’Brien injerjected, with a wry smile.

“You look back at Obama and Hillary Clinton. That’s the most obvious and most recent example that our country has of a very, very difficult primary election. The chair-woman of the DNC was on Team Hillary campaigning against Obama. Hillary called Obama a hypocrite from the very beginning.”

An impatient O’Brien interrupted, “It was ugly.”

“I have a good point here,” Priebus pleaded. “Hang on. Hang on.”

It’s an old political hack trick, shout the “mistake” and mumble the correction, and Priebus gets his facts wrong, anyway. If you’re going to be objective, Reince, not spinning here, Reince, you, Reince, ought to point out that the comment in question was from an obscure Obama campaign surrogate, and he said then-Sen.Clinton’s tales of sniper fire in Bosnia caused her to have a “lack of moral authority” to lay the wreath.

That exchange occurred in March, and was one of several nasty ones during the 2008 Democratic primary, but it doesn’t really apply to O’Brien’s question at all. This is January, and 92% of all ads are negative. The fact that an Obama surrogate was mean to Hillary in March of 2008 does nothing but underscore how bad things have gotten for the Republicans this year, and quick.

O’Brien also took the time to brace Priebus about his repugnant Italian cruise ship joke. “You’re talking about a tragedy that’s claimed lives while they were still trying to fish bodies out of the ship?”

Priebus repeated his previous defenses, including his apparent belief that the use of the word “clearly” magically erases dickishness.

O’Brien concluded the interview by calling back to Priebus’ “spinning” shot. “I try to be fair with everyone,” she said.

Republican leaders have learned that they can score easy points with their base by bashing the media, regardless of the merits, but people like Wolf Blitzer and Soledad O’Brien are beginning to fight back. You can only punch the ref in the balls so many times before he hits back.