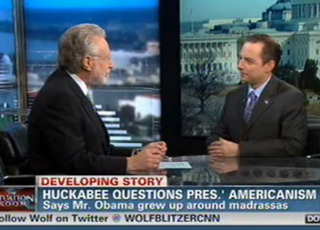 The fallout from Mike Huckabee‘s comments this past week, culminating with an ill-advised comment that, unlike the President, most Americans were not so familiar with madrassas is now spilling over into the rest of the Republican Party. It’s new chairman, Reince Priebus, is now being forced to answer for such comments and, upon being pushed into an answer by Wolf Blitzer, admitted he does not see a need for Huckabee to apologize, and washed his hands of the matter.

Priebus’ visit to The Situation Room began with a rapidfire segment where Blitzer asked about various topics, but first and foremost he asked the RNC Chairman for his opinion on Huckabee. Does Priebus think Huckabee owes the President an apology for following up his claim that he grew up in Kenya with a reference to a type of Muslim school the President never attended? “I don’t think he owes the President an apology,” Priebus responded. “We have freedom of speech in this country, I suppose he can have his own opinion.” While Priebus appeared to want to leave it at that, and Blitzer didn’t push too hard on that point, he did ask whether Pribus understood Huckabee’s agenda, or at least his strategy should he be considering running.

Here Priebus was far more tight-lipped. “I can’t speak for where Mike Huckabee is coming from, I wouldnt pretend to try, and it’s not my position to do that.” Blitzer didn’t push the point, nor could one really expect Priebus to get agitated had he tried. Nothing quite evinces Steele-era nostalgia like Reince Priebus answering a question on a hot topic within his party with all the fury of a sedated Mr. Rogers.