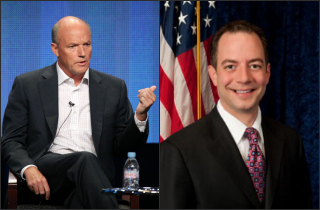 We’ve seen this movie before, and quite recently…

The script goes something like this: MSNBC host makes a provocative remark that goes viral. In Bashir’s case, it’s going on the air and calling for someone to defecate in a former VP candidate’s mouth, and a female one at that. In Baldwin’s case, which was done spontaneously in a fit of rage on a Manhattan street—it’s shouting a gay slur at a photographer. And most recently, in Harris-Perry’s case, it’s mocking the Romney family for adopting a black child.

In each of these instances, there were varying degrees of apology from each of the aforementioned, but very little in the form of punishment from management.

Bashir was somehow never suspended, instead resigning on his own. Baldwin was fired (some argue more because of horrible ratings and poor work ethic on the show). But like Bashir, Harris-Perry wasn’t suspended, either. Each still have something in common, however:

No apology to Sarah Palin, the gay community, or the Romney family, respectively, for any of these incidents from MSNBC President Phil Griffin.

So here we are again…you can almost set your watch to it. This time, it’s MSNBC’s faceless Twitter account drawing attention to the network in the form of a now-infamous Tweet, basically calling “the rightwing” racists for not embracing a biracial Cheerios ad set to air during the Super Bowl. Who exactly the right wing is…that’s anyone’s guess. So let’s just call define them as the 61 million people who voted for the Mitt Romney in the last election, with 67 million votes going to the President. That’s a ton of racists for a country that once gave Mr. Obama a 70 percent approval rating in 2009.

Based on the swift reaction social media now provides, MSNBC quickly realized that calling half the country bigots wasn’t such a hot idea. To remedy the situation, it tried to put the genie back in the jar (by deleting said Tweet) and, as they’ve become so accomplished at (because practice makes perfect) apologized for the remark. Of course, the apology didn’t come from Griffin or any specific person, but from Richard Wolfe, executive editor of MSNBC.com.

But the RNC—whose party is bludgeoned on MSNBC every day—isn’t having it and is instructing its members to boycott the network. Talk about a weak hand. It would be one thing if any remotely important Republican had appeared on the network in the past two years, but outside of Chris Christie—who (and this is just a feeling) probably won’t be going back on the air there in the next century or so—it’s almost impossible to name one prominent member of the party who has dared to go near the likes of Matthews, Maddow, Al or Ed since the 2012 campaign.

Having said that, RNC Chairman Reince Priebus commanding his troops to stay away from MSNBC is like telling the gay community to steer clear of Sochi when planning a vacation: It’s already happening and will likely continue as long as the party and network co-exist.

But Priebus is absolutely correct in demanding Griffin apologize for his network’s latest “lack of judgment,” which is how the 57-year-old executive described the actions of Bashir, Baldwin and Harris-Perry during a recent interview with the Hollywood Reporter.

“We quickly took responsibility for them and took action,” he explained. “They were unfortunate, but I’m not going to allow these specific moments of lack of judgment to define us.”

We’ve seen this movie many times before.

And while he’s at it, will be hold the person who wrote the Tweet accountable for his or her actions?

As they say, there is no such thing as bad publicity except for your own obituary.

But if Griffin keeps allowing this behavior to define his network, the only obituary anyone will be talking about will be the one regarding his career.