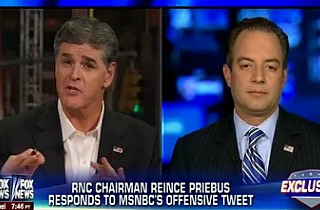 On Thursday, Republican National Committee Chairman Reince Priebus demanded that GOP politicians and committee staffers boycott MSNBC after the network sent out a tweet accusing the “rightwing” of being offended by a commercial featuring a biracial family. On Thursday night, Priebus joined Fox News Channel host Sean Hannity where he lauded MSNBC President Phil Griffin for quickly responding to the controversy. He warned, however, that the network was “on probation.”

“In their professed world of tolerance, they’re sure hitting on all eight cylinders of intolerance,” Priebus said of MSNBC. He reveled that he called Griffin personally and left a message asking for an apology and asking for a corrective action.

Priebus said that, “to his credit,” Griffin apologized and took that requested corrective action.

Hannity proceeded to play a series of clips of MSNBC hosts attacking conservatives for harboring racial resentment against the president and America’s African-American citizens.

RELATED: Rothman: The RNC’s Boycott of MSNBC is Brilliant

“Maybe it took too long,” Priebus said after viewing the montage. “Some of these things that are done about families, and people’s appearance and gender, race, blanket statements about people on the right side of our party, I’m just not going to stand up as chairman of the party and take it.”

He added that this was a “first step” and Griffin reacted “quickly.” Priebus said that Griffin and his network is on “probation” and the RNC is “watching them.”

Hannity wondered how NBC News veterans Matt Lauer, Tom Brokaw, and others feel about how their company’s brand has been “demolished” by MSNBC’s hosts behavior.

“They don’t have a problem with painting every Republican with a broad brush,” Priebus concluded.