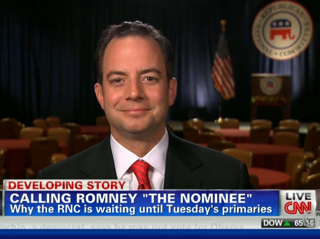 Republican National Committee chairman Reince Priebus is waiting on Newt Gingrich and Rep. Ron Paul before his party can officially say the general election has begun. This he told Jessica Yellin on John King USA last night, when asked repeatedly why he would not exercise the power of his position and just tell the last two remaining Republican candidates to go away. “People are tired of folks in Washington telling them what they should do,” he explained, responding that he wanted voters to decide whether Rep. Paul and Gingrich should remain in the race.

Priebus, the Tim Pawlenty to Michael Steele‘s Jesse Ventura, told Yellin yesterday that he and the party at large had yet to make an official endorsement, despite the almost inevitable possibility of a Romney primary victory. Why wait until Tuesday’s primaries [to endorse]?” Yellin asked, noting that the numbers aren’t exactly favorable to a Gingrich revival, much less a first-time Rep. Paul surge. “Out of respect and deference to Congressman Paul and Newt Gingrich,” Priebus replied, noting that the party is “moving slowly” and “communicating with all the campaigns.” He also declined to say he would ask the two non-Romney campaigns to step out of the way after this Tuesday’s primary. “I don’t think I would ever do that,” he replied, to which Yellin retorted, “Why? You’re the party leader.”

“It’s up to our primary voters to help them and others make the decisions as to whether or not they want to stay in the race or not,” he said, adding that he thought the approach was most respectful to voters who “are tired of folks in Washington telling them what they should do.” He also expressed satisfaction with how things were going with Romney so far, saying he was “doing very well.”

Yellin asked about what appears to be one of the biggest general election narratives coming up: the fight for Latin American voters. “The Republican Party is in a much better place to make the appeal with Hispanic voters,” Priebus argued, stating that Republicans have “better messengers– Marco Rubio,