Rob Lowe Asks Donald Trump To Reconsider A Run, Tells Him He’d Be A ‘Great’ President 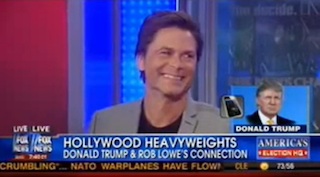 Well, this was a random trip to the mutual appreciation society. This morning on Fox & Friends, Rob Lowe stopped by and, during his time on camera, the show fielded a call from Donald Trump. Turns out the two of them have great respect for each other, with Lowe even trying to persuade Trump to run for President, saying he’d be “great.”

Man, this clip feels like one of those fancy dinner parties we all imagine are happening in Hollywood when we’re younger. You know, when we used to believe that every single famous person knows each other and hangs out all the time. Only this was apparently real.

I mean, were the compliments genuine or was this like those weird talk show interactions where the first act guest pretends to be excited by the second act guest’s movie just because they’re stuck on a couch together? Actually, the whole thing seemed pretty sincere with Trump apparently having some familiarity with Lowe’s entrepreneurial skills. There was even talk of Lowe joining Celebrity Apprentice but Trump, while certainly interested, was realistic about his chances of pulling in an “A-lister” (That show doesn’t get people from the A-list? What, is Dennis Rodman — chopped liver?)

This is, of course, good news. I’m pretty sure that Lowe leaving the masterpiece that is Parks and Recreation for the…something-piece that is Celebrity Apprentice would be second only to him going on Two and a Half Men in the category of “News That Would Ruin My Week.”