Robert Gibbs to MSNBC Guest: Are You Blaming U.S. For Syria Deaths?
VIDEO 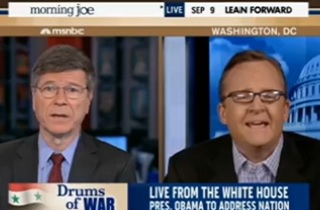 For the past several weeks, cable news has mainly been in the business of airing opinions about Syria from anyone who will offer one, which has turned out to be everyone. On Monday morning’s Morning Joe, that trend continued, as MJ regular, economist, and Earth Institute Director Jeffrey Sachs weighed in with a recap of the Syrian conflict that cast the United States as the reason the conflict has escalated to the point of over 100,000 deaths. Former White House Press Secretary and top Obama adviser Robert Gibbs was unamused, to say the least.

Dr. Sachs began by citing public opinion against military action in Syria, and explaining that the United States, in April of 2012, had “already started helping, with other countries, to fund this rebellion.”

“How did we do that?” host Joe Scarborough asked. “We hear from John McCain, and others, that we actually haven’t even begun to support the Syrian resistance.”

“That’s not the case,” Sachs said. “There has been a group called the Friends of Syria group, which has met several times, the foreign ministers. They have given active support, the United States support isn’t what McCain would like. He wants an even bigger war. But we’ve already gotten into this for more than a year and a half.”

“And Hillary was a part of that process,” Scarborough interjected.

“Of course she was. That’s why it’s escalated so much,” Sachs said. “Americans are just waking up to the fact we’re in that war too?”

“That’s the biggest problem, we’re in that war,” he continued. “It was a huge mistake to get into it. They thought it would be a quick deal, Assad would go and everything would be fine. What has happened we have funded a growing massive killing field, basically, on both sides, not just the U.S. side, but this is why there are is 100,000 deaths, because we are supporting a rebellion with gulf countries.”

Sachs is referring to the U.S. involvement in the Friends of Syria, which, until earlier this year, consisted of providing non-lethal and humanitarian aid to the Syrian opposition.

While exact figures are tough to come by, one recent report from The Syrian Observatory for Human Rights puts the death toll in Syria at 110,371, about 45,000 of whom are pro-regime forces:

The Syrian Observatory for Human Rights said the toll since the beginning of the 29-month uprising now stands at 110,371 people, with at least 40,146 civilians killed including nearly 4,000 women and more than 5,800 children.

The group, which relies on a network of activists, doctors and lawyers on the ground throughout Syria, said 21,850 rebel fighters had also been killed.

On the regime side, the group reported the deaths of at least 27,654 army soldiers, 17,824 pro-regime militia and 171 members of the Lebanese Shia group Hezbollah, which has sent fighters to battle alongside the Syrian army.

The group counted another 2,726 unidentified people killed in the fighting throughout the war-torn country up until August 31.

Former top Obama adviser and MSNBC contributor Robert Gibbs took exception to Sachs’ assessment. “That’s the most curious roundup of what’s happened in Syria that I’ve heard in two years,” Gibbs said, with an astonished pause, “that somehow — did you just say we’re responsible for 100,000 Syrians that are dead?”

“No, I didn’t say that,” Sachs replied, seconds after having said “this is why there are is 100,000 deaths, because we are supporting a rebellion with gulf countries.”

“You did,” Gibbs insisted. “You’re walking it back now.”

“Robert, listen to what I said,” Sachs responded. “I said we have helped to stoke a rebellion that led to killings on both sides, so we have built up…”

Gibbs interrupted, “I missed the transition where you didn’t blame the United States for somehow the actions of Bashar al Assad, who killed these people, including using chemical weapons, and killed 500 kids while they slept.”

“Robert, why did we get into somebody else’s war, undeclared, without the United States people knowing about it, and against international law?” Sachs asked.

“I guess i’m just hung up on the fact that the United States killed 100,000 people in Syria,” Gibbs responded.

“I did not say that,” Sachs insisted. “Let me say it again.”

“Maybe the third time will be the charm,” Gibbs said.

“Then I’ll say it again, Robert,” Sachs said. “Together with gulf countries, the U.S. has been supporting a military rebellion in Syria for a year and a half, and together with those countries has been funding logistics, salaries and arms flows that have led to a massive escalation of violence. This is not simply Assad killing his people, this is a war the U.S. has been supporting because we thought we could knock out Assad and lead another regime change, and it didn’t work.”

“Sir, everyone is entitled to their own opinion on Syria,” Gibbs said. “I think your history of this is convoluted at best. The notion that, somehow, we have played some huge role in the fact that Bashar al Assad has killed, and now gassed, his own people.”