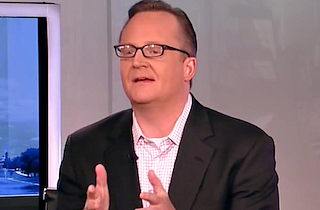 “I still think 98% of this problem is the website,” Gibbs said. (“You better hope so,” Chuck Todd said.)

“The good news for the administration, in the figures released yesterday, is 846,000 people completed an application, covering 1.5 million people,” Gibbs explained. “They haven’t yet selected an insurance plan. The 106,000 have. So there is demand for this. There’s curiosity, there’s demand for health care. That’s not surprising, we had tens of millions without health care. The question now is: is there a vehicle, the website, for them to actually do this? And if they don’t fix that, that’s the big problem.”

“Don’t you fear that a narrative sets in about the website that impacts the policy?” Associated Press’ Julie Pace asked. “Maybe they go back to the website and it’s not working, so they never go back and finish.”

“Yes,” Gibbs said, “except remember there are penalties at the back end. They’re not huge penalties, because the penalties obviously phase in, just like in Massachusetts. But it’s not a voluntary process. At the end of the day, you have to show by the end of March that you have proof of insurance.”

“It’s for the surprising that the numbers are 100,000 at this point,” said Representative Mike Doyle (D-PA). “People have been told the website’s not working properly. Three times as many sign-ups in the state exchanges as in the federal exchange. But the bottom line is this: once that website starts to function as we intend to function, I agree with Robert, I think a lot of this starts to go away.”