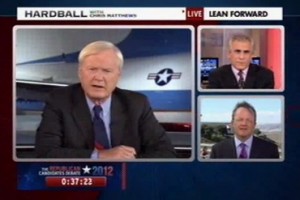 Matthews began by asking Gibbs “Is President Obama a liberal?”

Gibbs resisted the premise, steering his response around to the President’s relentless appeal to independent voters. “I don’t know that the President has really strong feelings on political labels on any side,” he said, before shifting the focus to Republicans’ opposition of measures they once supported, adding “Independents don’t want games.”

Things got a little testy when Matthews said “I don’t think the American people know what President Obama would do if no one were standing in his way. What would he do if he had the power to set policy” on things like the deficit and Medicare reform, adding, “We don’t know because he hasn’t told us what he wants to do.”

Gibbs took exception, cutting off panelist David Corn to say, “Chris is making some crazy, unfounded accusations that somebody needs to answer.”

Matthews responded incredulously, “Crazy and unfounded accusations? Tell me what the President wants to do with Medicare.”

Unfortunately, Matthews interrupted Gibbs before he could answer, but Corn stepped in to point out, correctly, that everyone knows Barack Obama is a “progressive-minded” person. Matthews’ premise is all wrong.

The real question is, what did Barack Obama do when there was no one standing in his way? With unbreakable majorities in Congress, he still allowed his agenda to be weakened by Republican ideas, passing a too-small, tax-cut-heavy stimulus, a health care reform bill without a public option (how great would Medicare For All sell against Paul Ryan’s voucher plan?), and toothless financial regulatory reform. Part of the problem is that many in his own party cosigned those bad ideas, but it’s fair to ask if a president should have more control than that over his own party.

People know where President Obama stands, they just don’t know why he keeps walking toward people who will never meet him halfway, or if he will ever stop.

As the segment ended, Matthews expressed hurt, saying, “I think, Robert, you do me a disservice when you say my ideas are crazy when I want clarity from this president.”