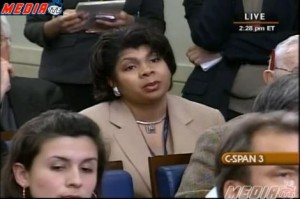 Since taking office as the United States’ first black president, Barack Obama has taken pains to maintain the perception that he’s post-racial, that he’s everybody’s President, while taking criticism that he hasn’t done enough for black Americans. His meeting today with the Congressional Black Caucus, the source of much of that criticism, was the catalyst for an exchange at today’s White House briefing that perfectly encapsulated that tension, as Robert Gibbs fielded literally dueling questions from April Ryan and Lester Kinsolving.

Anyone who’s a briefing junkie (there are more than you think) can tell you that the back third of the daily pressers are often the source of fireworks like this. As AURN’s April Ryan tries to ask Gibbs if the CBC has the President’s ear, and if the President has an urban agenda, WorldNetDaily’s Lester Kinsolving tries to fight his way in to ask if the President approves of what he calls the CBC’s “racial segregation.”

I’ve seen Gibbs answer questions like April’s (some from April) many times, and the answer is always along the same lines, that by helping all Americans, the President necessarily helps black Americans.  However, if stimulus and jobs bill funding is missing minority communities, as critics say it is, this rationale is more of a cop-out.A rising tide doesn’t help people who can’t even get on the boat.

Of course, Lester’s question points up the reason the White House’s relationship with the CBC is so politically sensitive. Race became a flashpoint issue during the President’s campaign, and it wouldn’t take much for his critics to paint him as giving black people special treatment. There’s a long answer to Lester’s question, about the absurdity of accusing an organization whose existence was necessitated by forced segregation of segregation itself, and there’s the short one Gibbs gave.

Whether you think the President has gone too far in distancing himself from the CBC or not, you can take a step back and see this conflict writ large. With record numbers of poor, unemployed, and uninsured Americans, why has most of the President’s pitch on healthcare and the economy been directed at middle class Americans who already have health insurance?