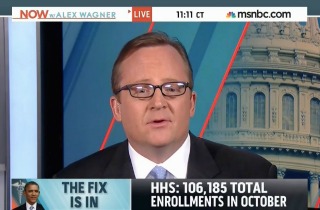 Former White House Press Sec. Robert Gibbs joined the panel guests appearing on MSNBC’s Now on Monday, and expressed a much less sanguine view of the White House’s political prospects in the wake of the problem-plagued launch of HealthCare.Gov. He said it would be “inexplicable” if President Barack Obama did not shake up the personnel involved in that failure.

MSNBC host Alex Wagner began by observing that the inadvertent “indictment” of government by using the prhase “private sector velocity” to describe the latest fixes to the insurance exchange website might have been a bad decision. Gibbs replied that, often times, “the truth is the best way to go at it.”

“This has been a completely unnecessary embarrassment,” Gibbs said. “It’s been an embarrassment for activist government in many ways.”

Wagner noted that influential National Journal columnist Ron Fournier has called for the president to shake up his staff to account for the failures associated with the implementation of the ACA.

“It will be inexplicable if somebody involved in the creation of the website doesn’t get fired or a group of people don’t get fired,” Gibbs added.

“There aren’t good excuses for not firing people,” he continued. “Private sector velocity should also include the velocity of moving somebody’s framed pictures out of their office and into a new job.”