Robert Gibbs on MSNBC: ‘If We Have to Negotiate with 5-Year-Olds,’ ‘Government’s Over’
video

Robert Gibbs on MSNBC: ‘If We Have to Negotiate with 5-Year-Olds,’ ‘Government’s Over’ 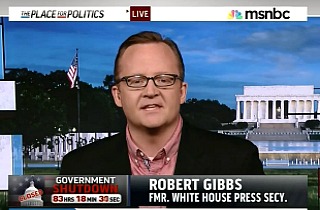 Roberts began by suggesting that he thought the House Speaker John Boehner (R-OH) has succumbed to a form of Stockholm Syndrome and is now defending the tea party “captors.”

Gibbs agreed and said that he believes the House GOP should put a “clean CR” to a vote which would, if it passes, likely end the government shutdown.

Later, Roberts played a clip of Sens. Mitch McConnell (R-KY) and Rand Paul (R-KY) discussing strategy and agreeing that Democrats refusing to negotiate is not going to be seen as a politically viable strategy by the American public.

RELATED: ‘We Are Winning’: White House Official Claims ‘It Doesn’t Really Matter to Us’ When Shutdown Ends

“So, that’s an unfortunate private moment caught on tape between the two Kentucky senators,” Roberts said. “What does that expose?”

“It’s almost as if they are trying to convince the troops to continue to fight this fight,” Gibbs said.

Roberts then played a clip of Sen. Lindsey Graham (R-SC) who said Gibbs advised President Obama to “sit back and watch this.” Graham called that advice “stupid.”

“We have a hostage situation,” he continued. “If we start negotiating with 5-year-olds about whether they should clean their room, because they want ice-cream before they clean their room, then government’s over.”