Robert Gibbs on Today: Someone Should Have ‘Already Lost Their Job’ Over Obamacare
VIDEO

Robert Gibbs on Today: Someone Should Have ‘Already Lost Their Job’ Over Obamacare 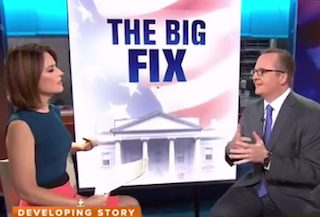 Former White House Press Secretary and current NBC political contributor Robert Gibbs appeared on the Today Show Monday morning, telling Savannah Guthrie that if the situation with the HealthCare.gov website had happened in the private sector, “somebody would have probably already lost their job.”

Gibbs began by saying the Obama Administration “absolutely cannot” afford another misstep when the December 1st deadline to have the Affordable Care Act’s web portal running smoothly arrives at the end of next week. This is particularly important, Gibbs explained, because anyone who wants health insurance to go into effect January 1st will need to sign up by December 15th.

“If you boil this whole thing down I think it comes down to two core issues,” Guthrie said. “The competence of the government, that’s the website glitches, and the president’s own credibility with the whole, if you want to keep your plan, you can. How do you repair credibility?”

Asked if somebody should “lose their job” for the mistakes that were made, Gibbs said, “I think if this were to happen in the private sector, somebody would have probably already lost their job and I think the only way to restore ultimate confidence in going forward is to make sure that whoever was in charge of this isn’t in charge of the long-term health care plan.”