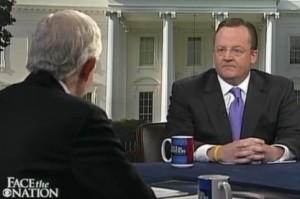 On CBS News’ Face The Nation Sunday morning, host Bob Schieffer indulged in a popular Supercommittee media narrative, asking  former White House Press Secretary Robert Gibbs why President Obama holds himself “above the battle,” and “how could he just sit there and let this Supercommittee fail?”

Gibbs handled the question ably, explaining “what the President did for the Supercommittee,” with one glaring omission.

After pointing out that the Supercommittee was a creation of Congress, Gibbs asked Schieffer to “understand what Barack Obama did for the Supercommittee. He laid out a plan that would have easily restructured our long-term fiscal picture and gotten our debt under control.”

“He got members his own party to support that, and he rallied the country around his plan, and they supported it. That’s what a president has to do.”

Schieffer then compared the President’s actions to those of Lyndon Johnson, and Gibbs responded, “If Barack Obama had the Republican party that Lyndon Johnson dealt with, I have no doubt we would make progress.”

That’s really the key here, because there’s one thing that President Obama did for the Supercommittee that Gibbs didn’t list. To use a metaphor the administration employed during the debt ceiling negotiations that resulted in the Supercommittee, President Obama put a gun to their heads (and now refuses to pull out the clip). As Gibbs points out, though, this GOP Congress is so hell-bent in its opposition of President Obama that they would rather pull the trigger than work with him.

Here’s the clip, from CBS News: