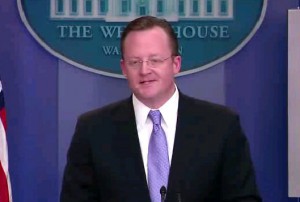 On Sunday, I reported that House Majority Leader Eric Cantor refused to reject Birther “crazy talk” on Meet the Press. At Monday’s White house briefing, I asked Press Secretary Robert Gibbs if he thought that Republican leaders had a duty to put the kibosh on Birther talk, and whether the President would do the same were the positions reversed. Gibbs responded that “rational people” don’t question the President’s citizenship, and pointed to Obama’s own record regarding his opponent’s status.

The previously-ebbed tide of Birther lunacy has risen, once again, on the strength of Gov. Neil Abercrombie’s (D-HI) now-open-ended quest to put the Birther issue to bed. With the 2012 campaign looming, Republicans now must decide whether they can afford to alienate elements of their base who cling to the Birther issue, or appear to be cow-towing to lunatics if they don’t.

Gibbs, for his part, didn’t seem nearly as anxious to have Republicans reject the Birthers as he was to point out their irrationality:

Transcript: (via email from The White house)

Tommy Christopher:   …First of all, yesterday on “Meet the Press,” House Majority Leader Eric Cantor was asked if he would reject birther crazy talk, and he wouldn’t.  But he did allow that he believes that the President is a United States citizen.  And I’m wondering if you think that Republican leaders ought to reject that kind of birther talk and —

MR. GIBBS:  I think rational people have come to the conclusion, many of them years ago, that the President is — was born in Hawaii and is a citizen of the United States of America.

MR. GIBBS:  Well, remember, there were concerns about the eligibility of the Republican presidential nominee’s birth in the Panama Canal Zone, and President Obama joined efforts to ensure that efforts were taken to, again, ensure that if there were any questions about what that meant for your citizenship — Tommy, again, I think rational people have long ago, many when they first heard and saw the President, come to the conclusion of his citizenship.

Gibbs is referring to then-Senator Obama’s co-sponsorship of a Senate resolution that laid to rest questions about Sen. John McCain‘s (R-AZ) eligibility to run for president, based on the fact that he was born in the Panama Canal Zone:

Resolved, That John Sidney McCain, III, is a `natural born Citizen’ under Article II, Section 1, of the Constitution of the United States.

Perhaps the next time one of them is asked, Senator McCain’s colleagues will return the favor, and stand up to this fringe element.