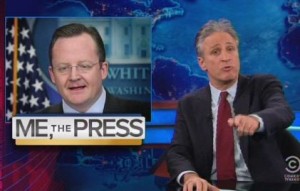 Former White House Press Secretary and recent MSNBC hire Robert Gibbs made big news this past weekend when he told Up with Chris Hayes host Chris Hayes that he was instructed, in preparation for his job as White House press secretary, not to acknowledge the existence of the drone program. This completely obvious, yet never-before-stated, fact moved Daily Show star Jon Stewart to denounce Gibbs for “admitting he lied” about the then-top-secret program, even after playing several clips of Gibbs clearly not lying about it. I asked Gibbs, via email, if he had any reaction to Stewart’s charge. It’s a charge that has since been repeated by Fox News host and Stewart bugaboo Bill O’Reilly, in an odd bit of synchronicity.

The uproar surrounding Gibbs’ admission has perplexed me, since the thing that made his tenure as press secretary the most interesting was the fact that we all knew that he knew things. When most press secretaries say something revealing, it just means they’re off-message, but with Gibbs, it was news, because he was so close to the President. Once the drone program was acknowledged by the administration, long after Gibbs had left, only the most innocent of babes in the woods would not have known that Gibbs knew about it. In fact, anyone listening to his answers at the time would have known this. That was the entire point of his admission, that the reporting on the drone program made pretending it didn’t exist untenable.

The fact that Robert Gibbs said, out loud, what anyone with a pulse already knew was certainly worth recording, but it didn’t seem to qualify as big news. As Gibbs points out, to have done otherwise would have been a crime. In response to Stewart’s assertion that he “lied” about the drone program, Gibbs told me, via email, that “If you look at any of my answers when asked about this program, I simply declined to discuss it, but I certainly never lied or misled anyone about it. As I have said, I couldn’t and wouldn’t have ever talked about a classified program. To do so is against the law and I’m not Scooter Libby.”

The clips that Jon Stewart played, and the ones that Chris Hayes aggregated, of White House reporters pressing Gibbs on the drone program as far back as 2009, bear Gibbs out. Whether you think the program should have been top secret is another matter, but accusing Robert Gibbs of lying is a case of shooting the non-messenger. It’s also ironic, because the whole reason we’re having this discussion is Gibbs’ impulse to be honest. Chris Hayes didn’t drag that  information out of him, Gibbs volunteered it, because he wanted to talk about the absurdity of trying to keep something secret that everyone already knows. Jon Stewart shouldn’t be blasting Gibbs, he should be paying him a royalty.