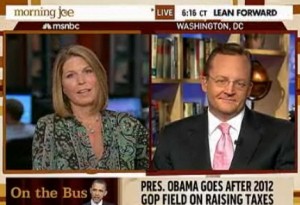 Former White House Press Secretary Robert Gibbs‘ appearance on Tuesday’s Morning Joe evoked a strong sense of déjà vu, even beyond the quippy, old home week banter with former Bush and McCain staffer Nicolle Wallace. Time‘s Mark Halperin asked Gibbs about a familiar line of attack on President Obama, noting that GOP hopeful Rick Perry (R-TX) responded to a reporter who asked him if the President loved America by saying, “You need to ask him.”

Gibbs called Perry’s “passion” for America a “remarkable turnaround” from his not-so-distant talk of secession from the United States.

According to ABC News, Perry was asked, Monday night, if the President loves America, and responded with a Pound Puppy™-cute answer:

At a Republican Party event Monday night, a reporter asked Perry whether he was suggesting that President Obama does not love America.

“You need to ask him,” Perry responded. “I’m saying, you’re a good reporter, go ask him”

Perry went on to call President Obama the “greatest threat to our country,” presumably because Obama killed the previous title-holder.

If all of this sounds familiar to you, that’s because it is. Gibbs was quick to point out that Perry’s position as judge of America-lovingness is Perry-lous, at best, given his repeated flirtations with secession from it. “Just two years ago, the Governor of Texas talked openly about leading Texas out of the United States of America, and now, this campaign has caused him to profess his love for the United States. I think it’s a remarkable turnaround.”

He went on to reference another golden oldie, saying, “Any day now, Rick Perry will ask to see the President’s birth certificate.”

I asked Gibbs if he believed Perry’s turnaround was sincere, and he really does love America now, or is this a political calculation? He responded, “You need to ask him. I’m saying, you’re a good reporter, go ask him.”

Elsewhere in the clip, Gibbs faced friendlier fire from former McCain adviser Nicolle Wallace, who accused Gibbs of doing some recycling of his own. Gibbs presented the 2012 election as a “choice,” a verbatim copy of his framing of the 2010 mid-terms. Wallace accused the President of trying to run against Bush again, and Gibbs conceded that the current GOP’s plan to voucherize Medicare is something new, that Bush never tried.