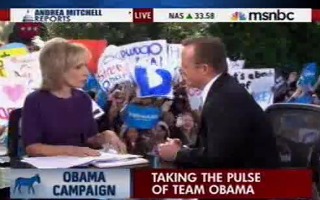 On Monday, Republican members of the Senate Armed Services Committee released a letter attacking the White House for attempting to shift blame from the Obama administration to the State Department for the security failures that led to the attack in Libya in September. In a Tuesday interview, MSNBC host Andrea Mitchell asked former White House Press Sec. Robert Gibbs about the senators attacks. Gibbs said that those attempting to politicize the attack in Benghazi and indict the Obama administration for failing to protect Amb. Chris Stevens, particularly Sen. Kelly Ayotte (R-NH), were exhibiting “shamelessness.”

Mitchell had just concluded an interview with Sen. Ayotte, a co-signatory of the letter admonishing the White House for attempting to shift blame for the Benghazi attack. Following that interview, Mitchell pivoted to Gibbs to ask him for a response to the letter’s accusation that, if the president did not know about the security threats in Libya as White House spokespeople have claimed, his national security team have lost credibility.

“What do you say to Sen. Ayotte and to Lindsey Graham and to other senators who say that the president was either not informed or covering up,” Mitchell asked.

“The shamelessness of that interview was really remarkable,” said Gibbs. “The notion that anybody wants to find out what happened in Benghazi more than Barack Obama – we have to figure out what happened to make sure it never happens again, but the lengths to which some members of the Republican party are going to play politics with this issue, I think, is startling.”

Gibbs concluded saying that the administration “has not been deceptive” or “misleading in any way, shape or form.”