Rocky Mountain Lie: Mitt Romney Lost Debate In The Only Way That Doesn’t Matter At All 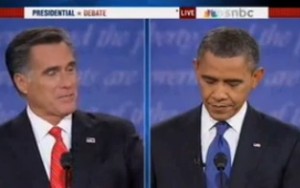 There’s no way to sugarcoat this. In every way that matters in the 2012 presidential election, in every way that will result in votes, Wednesday night’s debate was a clear, resounding victory for Republican challenger Mitt Romney, and a blow to the momentum that President Obama has built over the past month or so. The President owns a large share of this defeat, just as Mitt Romney deserves credit for his near-flawless tactical execution, but Romney’s greatest asset is a series of failures that rendered him immune to the consequences of Mount Rushmore-sized lies.

On Wednesday night, viewers tuned in to see a presidential debate at the University of Denver, but what they got was a pro wrestling match that everybody but President Obama was in on. Moderator Jim Lehrer quickly proved himself to be the consummate pro-wrestling referee, ignoring the screwdriver that Mitt Romney was stabbing Obama in the neck with, and while Romney lost badly on the substance, on  the things he was saying actually being true or making sense, all viewers and pundits were left with was a vision of President Obama bleeding from the neck.

For the rest of the week, you’ll hear fact-checkers scoring this debate, parsing exaggerations and omissions by either candidate, but there was one whopper that set the tone for the entire debate, and exposed the weaknesses in the key players. When Gov. Romney claimed that his tax plan didn’t include a $5 trillion tax cut (by virtue of a 20% cut in tax rates), President Obama repeatedly pointed out to the audience, and to moderator Jim Lehrer, that Romney was stabbing him in the neck with a screwdriver. In other words, this wasn’t just the normal spin or exaggeration you expect in a contest like this, it was a fundamentally invalid statement. Lehrer should have stopped Romney and asked him to clarify, to explain how much revenue Romney thinks would need to be replaced in order to enact such a rate cut.

Instead, Romney simply got to repeat the ostensible claim that cutting rates by 20% actually wouldn’t cost $5 trillion, thereby relieving him of the burden of explaining how to pay for it. What he actually said was “I’m not looking for a $5 trillion tax cut. What I’ve said is I won’t put in place a tax cut that adds to the deficit,” jumping completely over the middle of the equation, where you explain how the 20% rate cut doesn’t add to the deficit. It’s a logical fallacy that says that if cutting tax rates by 20% can be offset by eliminating loopholes and deductions, then it’s not a $5 trillion tax cut, so you don’t have to explain how to offset it by eliminating loopholes and deductions. Lehrer abdicated his role as moderator in the most fundamental way when he failed to point this out.

The President was persistent in this case, pointing out the bewildering logic at work. “It’s not possible to come up with enough loopholes and exemptions,” President Obama said. “It’s math. It’s arithmetic.”

Again, there will be fact-checks aplenty, but there was another moment in which Jim Lehrer failed so miserably, so inexcusably, that it fundamentally changed the nature of the contest. Mitt Romney responded to one of President Obama’s most powerful moments, his explanation of the benefits of Obamacare, with this unambiguous lie: “pre-existing conditions are covered under my plan.”

President Obama correctly, if less-than-clearly, pointed out that Romney was lying, that his plan doesn’t replace the preexisting clause in Obamacare, but simply leaves things as they were before reform. “But let’s go back to what Governor Romney indicated, that under his plan he would be able to cover people with pre-existing conditions. Well, actually, Governor, that isn’t what your plan does. What your plan does is to duplicate what’s already the law, which says if you are out of health insurance for three months then you can end up getting continuous coverage and an insurance company can’t deny you if you’ve — if it’s been under 90 days.”

“But that’s already the law. And that doesn’t help the millions of people out there with pre-existing conditions. There’s a reason why Governor Romney set up the plan that he did in Massachusetts. It wasn’t a government takeover of health care. It was the largest expansion of private insurance. But what it does say is that insurers, you’ve got to take everybody. Now, that also means that you’ve got more customers.”

Now, Lehrer can be forgiven for not knowing, right away, that this was a lie, but when President Obama pointed it out, Lehrer should have followed up. Romney’s plan actually represents a rollback of the rights that were passed under HIPAA in 1996, which doesn’t require “continuous coverage” the way Romney does, but allows the grace period that President Obama described. That’s a checkable thing, and Lehrer should have, at a minimum, made Romney clarify his position.

However, once Lehrer made it clear that he had no intention of keeping Romney from stabbing President Obama in the neck with a screwdriver, or smashing him with metal ringside chairs, President Obama needed to get that screwdriver away from Romney, and neck-stab him right back. Instead, he strained to retain his detached presidential aura, rarely addressing Romney directly or even looking at him, letting a hailstorm of bullshit fly by him as he looked down taking notes (while Romney was claiming to be pro-education, whose job was it to point out that he had viciously mocked the idea of hiring more teachers?), and failing to launch a single attack of his own. When Romney claimed to care about the poor, where was the President’s 47% counterattack?

There is a counter-factual argument which says that even though he lost the debate, maybe President Obama was right to hang back, that if he had blasted Romney as the contemptuous liar he is, it would have lost him even more in style points. None of that matters. In modern politics, facts don’t matter, and you can assign blame wherever you want, to a viewing public unconcerned with substance, to journalists who fail to deliver substantive analysis, to debate moderators who fail to make facts matter, but the effect is that Mitt Romney won this debate, and he’s right back in this race. Only a fraction of the debate audience will ever see Romney getting killed by fact-checkers.

Going forward, people like Ed Schultz are going to expect President Obama to bring the thunder in the next two debates, but having covered Barack Obama for a very long time now, I don’t see that happening. It’s not in his strategic arsenal to take that kind of a risk in a low-reward situation, and he doesn’t ever play with scared money. The President will continue to press his known advantages, which are his skill as a campaigner, his ground game, and his campaign’s canny use of resources in swing states. No matter how much you want him to, President Obama will not be going all Sergeant Slaughter on Romney in the next debate.