Rodman: ‘Obama Can’t Do Sh*t,’ So ‘I’m Going To Try’ To Get American Freed From North Korean Prison
video

Rodman: ‘Obama Can’t Do Sh*t,’ So ‘I’m Going To Try’ To Get American Freed From North Korean Prison 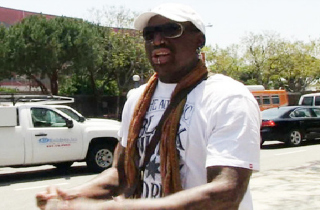 Former basketball star turned wannabe diplomat Dennis Rodman has indicated he will return to North Korea later this year. This time, however, he plans to use his trip to try and free American citizen Kenneth Bae from one of Kim Jong Un‘s prison camps — especially because, as he believes, President Obama is incapable of freeing the imprisoned man.

Bae was arrested in November 2012 while leading a legal tour of North Korea and sentenced to 15 years of hard labor because of his alleged “crimes aimed to topple the Democratic People’s Republic of Korea.” Rodman, who famously visited with the hermetic dictator he calls “Kim” earlier this year, led an internet-based plea for Bae’s freedom, tweeting: “I’m calling on the Supreme Leader of North Korea or as I call him ‘Kim’, to do me a solid and cut Kenneth Bae loose.”

TMZ cameras caught up with Rodman this week and asked him just how effective he believes his efforts will be. “Once I go back over there August 1st, I hope I can do one thing, at least get time served,” the former basketball star said.

“It’s going to be difficult,” he continued, “because I think his nationality, as far as background, I think there’s a whole different situation. That’s the thing. But, hey, I’m not a diplomat, man.”

As the reporter peppered him with questions about Bae, Rodman began to act dismissively, telling the cameraman: “I’m going to do one thing for you. We got a black president can’t even go talk to him, how ’bout that one? Put that on your goddamn show!”

Asked to clarify, Rodman explained: “I’ll put it like this: Obama can’t do shit. I don’t know why he won’t do it, so do that bullshit.”

Watch the full video below, via TMZ: