Roger Ailes Talks Palin, Weiner, And Explains Why Glenn Beck Is Out At Fox News 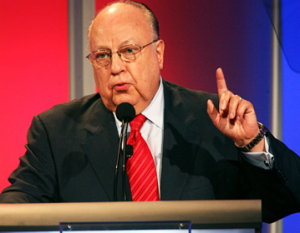 No, Roger Ailes insists, he does not think Sarah Palin is an idiot. Far from it. In an interview with Newsweek‘s Howard Kurtz, the Fox News boss responds to a recent run of lousy media coverage, including two magazine profiles (in Rolling Stone and New York–neither of which Ailes cooperated with) that, in Kurtz’s words, portray Ailes as “power mad, paranoid, and a GOP puppeteer.”

Does Ailes double down in the face of bad press? Hardly. “Part of his genius is that when he faces hostile fire, Ailes can turn unexpectedly mellow, the better to make his critics look like the loony ones,” Kurtz writes.

On Palin, Ailes described a pleasant family meeting at his office:

Ailes told me he met with Palin in his Manhattan office, serving chicken sandwiches and giving her parents and daughter Piper a tour of the Fox studios. Palin told him she’ll decide on a White House bid this summer. Denying a New York magazine report that he called the former Alaska governor an idiot, Ailes marveled at the frenzy surrounding her tour of historic sites: “She’s so smart she’s got the press corps running up the whole East Coast behind her bus.”

In the story, Ailes explains why Glenn Beck will soon be an ex-Fox News host, saying it wasn’t just Beck’s rhetoric that ran him afoul of his bosses. It was his wide-ranging business priorities. “His goals were different from our goals… I need people focused on a daily television show.”

Ailes also offered new takes on two Democrats who don’t usually enjoy lavish praise on Fox News, Rep. Anthony Weiner and President Obama. Ailes, pressed to find something positive to say about Obama, said simply: “He shot that SOB in the head that killed 3,000 Americans. That was his finest hour.”

And as for Weiner, whose career has skidded into a tabloid frenzy over a Twitter pic, Ailes says enough already. He’s directed his newsroom to “move on” unless something new develops on the story. “The media’s had enough giggles over Mr. Weiner and his name,” Ailes says. “Sometimes the families take a bigger hit than the person that people are trying to destroy.”