Roger Goodell to Marshawn Lynch: ‘Part of Your Job’ to Speak to Media
video

Roger Goodell to Marshawn Lynch: ‘Part of Your Job’ to Speak to Media 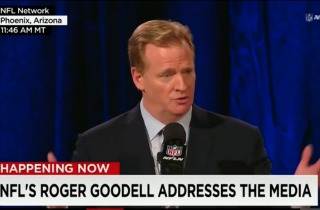 At his pre-Super Bowl press conference, NFL Commissioner Roger Goodell said Seattle Seahawks running back Marshawn Lynch has an “obligation” to speak to the media because it is part of his job and “comes with the territory.” Earlier this week, at his Super Bowl media day press conference, Lynch — known for his hostile relationship with the press — responded to every question with, “I’m here so I won’t get fined.”

For those reasons, Goodell said, fans are “curious” about the various storylines surrounding the Super Bowl, and members of the media want to clearly portray them.

Goodell said the league will make a decision on whether to fine Lynch — for wearing an unlicensed hat at that Tuesday presser — after the Super Bowl.

And you can watch Lynch’s “I’m here so I won’t get fined” press conference here, via ESPN: