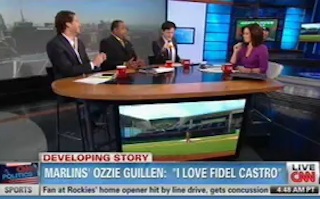 On CNN’s Starting Point Tuesday morning, Roland Martin and host Soledad O’Brien got into a spirited discussion over whether Miami Marlins manager Ozzie Guillen should be fired for making supportive comments about former Cuban President Fidel Castro. (Update: The Marlins announced Guillen would be suspended for five games.)

“You have an individual from Venezuela and whether we want to own up to it or not in this country, there are people in other parts of the world who have a different view of Fidel Castro based upon his fight with the United States,” Martin observed.

“You’re saying he admires Fidel Castro’s tenacity more than his policies or oppression of his people?” co-panelist John Fugelsang asked.

“Oh please! Come on!” O’Brien — whose mother is Cuban — interjected. “You are working hard!

RELATED: Castro’s Awakening: After His Admission That The Cuban Model “Doesn’t Work,” What’s Next?

“I’m trying to be fair to the guy,” explained Fugelsang. “If I went to Texas and talked about how great Santa Ana was in Houston, it wouldn’t be popular, but it was a long time ago.”

“As a nation, we play footsie with a whole bunch of dictators, if we really want to be honest,” Martin continued. “Maybe we don’t like having the conversation. We played footsie with Mubarak.”

“He said ‘I love Castro and admire Castro,'” O’Brien fired back. “Ooh, our stadium is in Little Havana in Miami, whose people’s lives were destroyed by Castro. He needs to go back and apologize!”

“And he is!” countered Martin.

“It would be great to have a conversation about how he treat communist nations, how do we bring them into the first world?” Will Cain added. “That said, going into Cuba and praising the man who has had prison camps and firing lines just south of the border isn’t a good idea,”

Later in the discussion, Martin reiterated that the United States’ foreign policy had been accommodating to other unsavory leaders.

Watch the debate below via CNN: