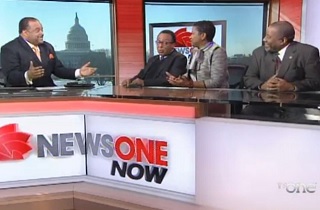 The debate over the use of the n-word by white people has recently become the subject of unwarranted confusion, but it’s use among black people has long been a subject of genuine contention. During a segment pegged to Richard Sherman‘s postgame interview, NewsOne Now‘s Roland Martin challenged syndicated columnist Clarence Page for subscribing to the Chris Rock Theorem, which states that there is a difference between black people and n*ggers.

The reactions to Sherman led to a discussion of the ways in which black men feel pressure to modulate their emotions. Early in the segment, Martin shared how he felt there was a double-standard at CNN, whereby viewers felt that Martin was “angry” or “upset,” but “I would look at the white guy sitting next to me, and he was ‘passionate’ and ‘focused,’ and things along those lines,” and wondered “How does that then translate to who gets a show?”

Page responded that “You can’t say that black folks aren’t making it in television,” and added “Who can anticipate what the chemistry is that will make people tune in? You can be an Oprah, who’s very congenial and open and welcoming, or you can be a… I’m trying to think of a black equivalent to a Bill O’Reilly, but nobody’s really given him a chance.”

“That’s my point!” Martin exclaimed, adding “A white man gets to walk through, a white woman gets to… frankly, you can do you!”

Later, Martin shared a tweet from a black viewer who tweeted “So-and-so was acting like an n-word,” and Martin asked “Why is it that you couldn’t just disagree with him, but you had to go there?”

Page responded “Maybe they really were acting like a n-word.”

“Well, what the hell is that?” Martin asked.

Martin pointed out that Rock later retired and disavowed the routine.

“White people shouldn’t do it, as we saw in one episode of The Office,” Page said, “but there is a difference.”

“But what is the difference?” Roland asked. “What elevates someone (to) ‘Now, you’re acting like a n-word’? How do you even define what that is?”

“The dude who broke into my car last week,” Page offered.

“How about he’s just simply a robber? Because if a white guy broke into your car, would he be the n-word?” Roland asked.

“Well, it depends,” Page said, then said that black people have to “deal in the reality” of a world where stereotypes exist.

Martin asked “Do we deal in that reality, or do we make the focus to change that reality?”

“How did he behave like a thug?” Roland interrupted. “He didn’t cuss anybody out, he didn’t swing at anybody, I’ve seen baseball managers sling bases, throw coolers, go nuts, and you know what they say? That’s the game.”

Page later denied calling Sherman a thug, but argued that black people in the public eye need to expect some “inaccurate descriptions,” and described how he tells his som to expect people to make judgments about him based on his dreadlocks.

Martin responded that “Maybe we should call it out, discuss it, and make people say ‘Maybe I should question my judgment.'”