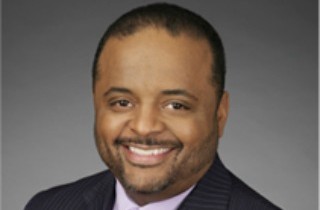 On Thursday afternoon, radio host Roland Martin got in a series of heated debates with callers who agreed with Rep. Alan Grayson‘s decision to liken the tea party movement to the Ku Klux Klan.

One caller, identified as “Walter in Washington, D.C.,” told Martin he completely concurs with Grayson. “[Tea partiers] are a joke,” he said. “They have nothing but racist contempt for the president.” The caller added that the tea party has been “pimped by corporate America” to represent moneyed interests as opposed to “limited government.”

Walter began shouting, at one point, that former RNC chairman Michael Steele never appears on Fox because the network banned him for being an “independent Negro.” According to the caller, Steele represents a “conservative Negro getting his comeuppance by his white master.”

After calming the caller down, Martin pointed out that Steele signed an exclusive contract with MSNBC, and thus he doesn’t appear on other networks like the more right-leaning Fox.

In another segment, Martin spoke to a caller named “Baba” from Baltimore who insisted that the tea party is racist because of examples like former Congressman Robert Ehrlich (R-MD) voting against “every single piece of civil rights legislation.”

“You believe it is fair and just to say the tea party is the same as the KKK?” Martin asked.

“When you use the Confederate flag or come to events armed and whatnot, then I can speculate that,” Baba replied.

“It’s my opinion, Roland!” the caller shouted, with Martin telling him flatout that it is “wrong.”

Things got a bit tenser when Baba called Martin a “negro” and proceeded to lambast “House Negroes” who have supported Republicans, a point which the radio host said “made no sense whatsoever.”

Martin later made the point that his fellow black Americans would “hate it” if “the right-wing” spotted a few Black Panthers at an NAACP rally and then said the entire organization is a “hate group.”

Listen below, via NewsOne Now: