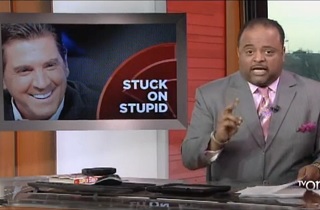 “Yesterday, on The Five, Bolling and the other panelists went after Reverend William Barber of the North Carolina NAACP for slamming South Carolina Senator Tim Scott,” Martin said, adding “A clearly miffed Bolling had this to say.”

He then played a clip of Bolling saying “It’s getting tiring. We have a black president, black senators, we have black heads — captains of business, companies, we have black entertainment channels. Where is the… Is there racism? I don’t think there’s racism. I think the only people perpetuating racism are people like this gentleman from NAACP, are the Al Sharptons of the world. Let’s move on. Let’s move on.”

“Really, Eric?” Martin said. “No racism? A black president, and other black folks have all these jobs, and there’s no racism, it’s magically disappeared? Here’s what Bolling could have discovered in a 0.43-second Google search, using the words EEOC and racism.”

Martin then spent several minutes recounting some of the results of that Google search, specifically some of the EEOC’s significant race/color cases. As Martin pointed out, there are even a few cases where white people were being discriminated against.

“It is idiotic when you go on television and actually say there’s no racism,” Martin continued. “How simple is it to use Google to find it? None of this includes what happens on the state level, in schools, in the criminal justice system, what happens in private lawsuits.”

“If you’re going to go on television and talk to all the white folks who watch Fox News, because you’ve got a really small black audience, at least have the decency to find some facts,” he added.

It would be a simple matter to beat up on Eric Bolling, who is actually using the existence of “black entertainment channels” as evidence that there is no racism, while speaking to an audience that is 2% black, and who has a history of deploying ghetto stereotypes on President Obama, the black president he presents as evidence that there’s no racism (Bolling, to his credit, did apologize on one of those occasions), and whose network doesn’t feature a single black anchor in its daily lineup, a network which passed over longtime White House correspondent Wendell Goler to hire Ed Henry away from CNN to be their Chief White House Correspondent. It would be simple to crack wise about how what Roland Martin said was “true in the numbers,” but that’s not where Fox News lives.

The truth is more complicated than that, though, because favorite comedian of liberals Bill Maher has an even more prolific tendency to ghettoize President Obama (and never apologize for it). CNN was making huge gains with black audiences a year ago, then jettisoned a whole lot of black on-air talent, including Roland Martin, and passed over black White House correspondent Dan Lothian more times than Fox ever passed over Goler (Lothian left the network in October, after ten years). Even MSNBC, tops among black cable news viewers, has missed opportunities to broaden its racial diversity (although they currently have a few openings to fill). In the year 2014, there has still never been a solo black anchorman on any of the Big Three nightly newscasts, and only one black co-anchor, Max Robinson, who died in 1988.

But television news is just a tiny sliver of the wider American media world, where black popular culture is largely either stolen, ghettoized, or tokenized. Bolling unwittingly identifies the problem when he cites black entertainment channels, which are only necessary because black life is so egregiously underrepresented in the rest of the media. Racism is invisible to Eric Bolling because it is invisible to Eric Bolling, and millions of other white people who only have to think about it when they’re watching The Five, or an MSNBC segment on voting rights, or a Don Lemon rant on CNN, or while they’re promising they’ll go see a movie about it during a commercial for 12 Years a Slave.

They don’t have to think about it when they’re shopping at Barney’s, or trying to get a driver’s license they don’t need, or walking down a city street, or sending their children out into a world that views them as threats, or standing in their own driveways, or being pulled over by the police. In all seriousness, racism is true in the numbers, but it’s not real to many people, even those who know it exists. The good news is that Roland Martin’s suggestion works well on the broader problem: just a little bit of curiosity goes a long way. Martin advises Bolling to “look for racism” using Google, which is the 21st century epitome of white privilege: the luxury of choosing whether to look for racism, rather than living each day with the prospect that it will look for, and find, you.