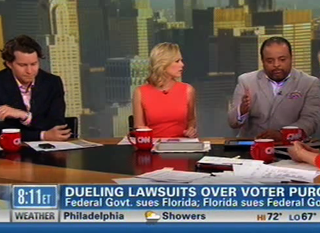 Earlier this morning, Florida Governor Rick Scott took to CNN to defend his lawsuit against the Department of Homeland Security for not giving him access to their federal citizenship lists. It took mere seconds from when Scott departed the show for Roland Martin to decry his arguments as “pure foolishness,” accusing Scott of not being “serious about people voting.”

“That was pure foolishness– he signed one of the most restrictive voter suppression laws in the country,” Martin argued to host Christine Romans and panelists Margaret Hoover and Will Cain. He added that Scott had taken felons off of voting registration rolls and outlawed voting on Sunday before the Tuesday election, which demonstrated his lack of interest in helping more people vote. “They would not have passed those ridiculous laws if they were serious about people voting,” he added.

Hoover challenged him on this point, arguing that “the problem with your rebuttal is that it suggests these guys are malevolent, evil people trying to suppress minority voters,” which Martin thought was beside the point, as opposed to central questions like “should we allow voting on the Sunday before the Tuesday of the election?” Hoover thought it was fair for the governor to set the rules as he saw fit, as long as “all the citizens of Florida know the rules.” Cain added that the discussion appeared to have ballooned into something more complicated than the questions at its core: “is there a legitimate goal in removing non-U.S. citizens from the voter rolls” and, if so, “are these laws legitimate implementations of that goal?”